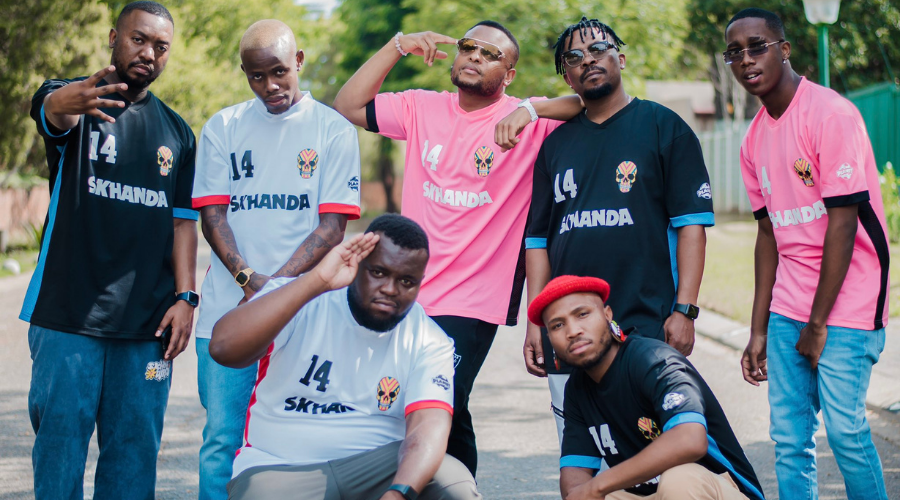 The cat is officially out of the bag and as Universal Music Africa, we could not be more prideful to officially welcome SKHANDAWORLD to the roster. In a star-studded conceptual press conference on Wednesday, 10 November 2021, in front of a crowd with contemporaries including Ayanda MVP, Shugasmakx, Speedsta, L-Tido, Sjava and Cassper Nyovest, news of SKHANDAWORLD joining Universal were confirmed.

SKHANDAWORLD is the conceptual record label, clothing and lifestyle brand co-founded by the father of the Skhanda, Ntokozo “K.O” Mdluli and long-time manager and business partner, Tsholofelo Moremedi.” The brand was the second iteration of a world envisioned by the pioneer of the musical subgenre, Skhanda. A sound which incorporates kwaito and hip hop not only in the music but blends the two cultures together into one cohesive entity which is SKHANDAWORLD. Officially established in 2020, in the year since the formation of the entity, the co-founders have worked on grooming new talent; each with a unique sound.

First was the enlistment of Teargas alumni, Ma-E, the rapper and K.O started in the mainstream music industry together and have since grown in this industry whilst continuing to make music together. The first signee of SKHANDAWORLD was Loki, followed by Roiii, DJ Mr X and the last to be enlisted in the fold was Just Bheki. Now the formation of six have solidified their brand and brotherhood.

In light of having solidified their brotherhood, the formation is now looking to spread their brand globally. This is through their first collaborative compilation aptly titled Welcome To The Planet. An 11-track compilation, which introduces the world to the voice and style of the SKHANDAWORLD. From the kasi rap style of Loki, to the Motswako and European drill style of Roiii, to formally introduce Ma-E back to music. Along with the soulful and maskandi-influenced voice of Just Bheki.

The lead single of the compilation is the K.O led single, "Homeground". The hard-hitting single which sees everyone go verse-for-verse as they introduce themselves. The second single to be released was the Ma-E led single, Ain’t No Tomorrow. As they prepared for the official release of the EP. Skhanda World gives us the visuals of the Homeground music video.