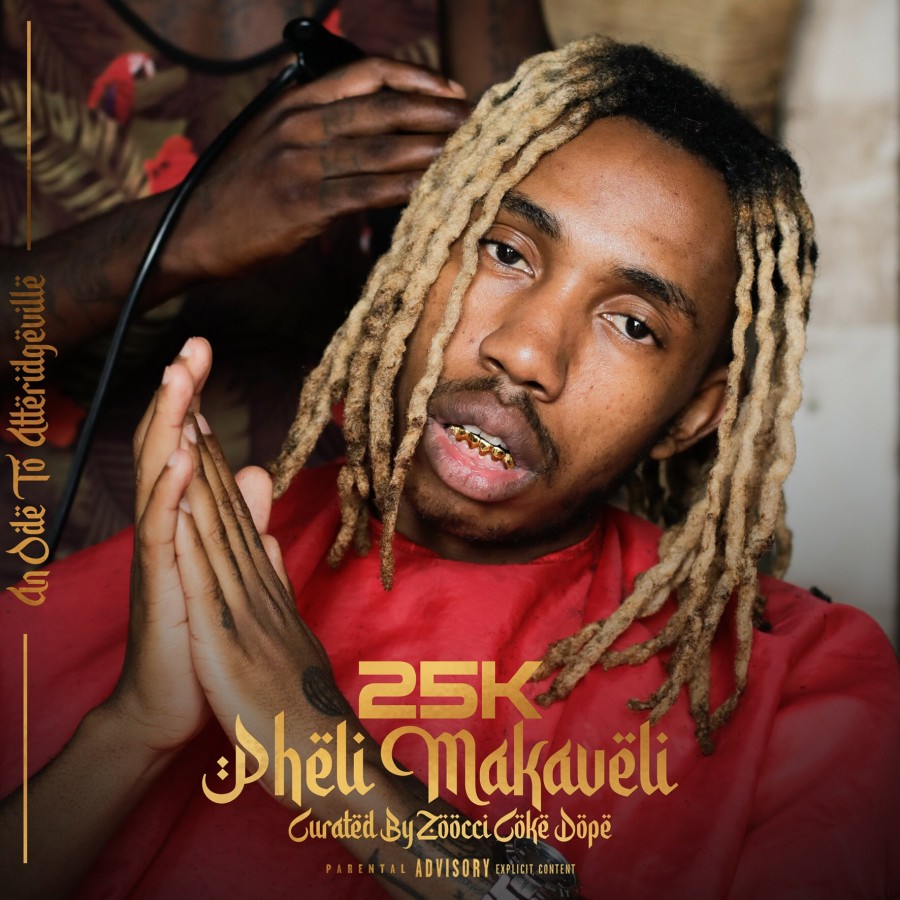 About the 'Pheli Makaveli' album.

From the onset, 25K’s debut album 'Pheli Makaveli' tells the gripping story of a young hustler on the come-up. “The project is about my upbringing, my story and my journey before the music and when I fell in love with the music.” 25K continues to say “It sums up a bit of everything about me from back when I was in the streets, hustling, when I used to stand on the corner, hoping to make a little sale.”

'Pheli Makaveli' does paint a picture bearing political undertones: feeling neglected and let down by the politicians they vote for, the people resort to unlawful means of survival.

As heard on our recent 'Backyard Sessions' with 25K, he mentioned; “The title 'Pheli Makaveli' was suggested by Zoocci Coke Dope.”

The album opens with the fiery intro ‘Pheli Makaveli (Intro)’ - “As Zoocci was making the beat in studio, the melody hit me, and then I just took out my phone and I wrote three or four lines. Then we took a break and went to play FIFA with Zoo’s homie. I still had the melody stuck in my head as we played. I finished writing the verse while we were there and we went back to the studio. I did the verse in one take, and just where the verse ended off that's where, I had wrote my final lines and that's where the drums totally shut down."

Blarofornia (feat. Zoocci Coke Dope) - “We always refer to Pretoria as ‘the west side’. So, it only made sense to do a song that had a West Coast feel to it. ‘Blaro’ is another name for Saulsville, the part of Atteridgeville that I come from called Black Rock—shortened to Blaro.”

Omertà -  “The title comes from me watching a lot of gangster movies and shows, especially the Italian ones —The Sopranos, Goodfellas, The Godfather 1, 2, 3. Omertà is the initiation ceremony; the oath that you say is the omertà of the mafia. I've now made an oath to the homies that even though I'm doing this music thing, I'll never let them down. So, if they hold it down in the hood for me, I'm a hold it down for them with this music thing."

Hustlers Prayer (feat. A-Reece) - "I met Reece in 2018. We agreed to collaborate and I sent him a song, but he took a long time to record his verse. While Zoocci was mixing the project, he suggested we get Reece on this song. We sent the song to him and he liked it, so we agreed to forget the first one. And then COVID-19 happened, and I couldn’t reach him, until I dropped ‘Ghetto Angels’ in 2020—that’s when he hit me up to say, ‘Yo, bro, apologies for that, I was going through some stuff, but I'm better right now.’ When he eventually sent the verse, it made sense why I couldn't reach him at that time, [because of] what he was going through [after the death of his father in 2020]. I could relate to that, because I also lost my dad when I was in primary school. So, it was a deep song for me to listen to at the time, because that's how he explained what he was going through during that time—he actually put it in the song.”

Trap Jumpin’ - “Space Save Logic, who I work with from time to time, sent me a beat named ‘Trap Jumping’ and I wrote to it, about me making the trap jump. Zoocci sampled the beat and flipped it into something else. For the skit, Zoocci was like, ‘Yo, who's the craziest guy you ever heard in SA talking that real talk?’ We watched that video of Maleven and we laughed at it. The next time Zoocci played me the song, that was the clip he had put on the song. So, I was telling him where to chop it and which parts to use in the song.”

Dagwood - “The song was inspired by true events; when you come up in the industry and you have all these different women showing love, you never really know who's really genuinely showing love like that."

Project Baby (Interlude) - “Kodak Black calls himself a ‘Project Baby’. I’m saying, I'm a township kid, but in a hip-hop sense. So, I’m also trying to tell people that, ‘Yo, I'm a Project Baby.’ No cap whatsoever. The message is to let the people know that in the hood, it gets wild like this, and being a Project Baby, this is what comes with it. In the hook when I say, ‘I stick to the process I was raised up in the projects’, I'm telling you, I’m willing to face these challenges because I was raised around them. Sometimes people in the hood are not really involved in politics, but they face the struggles, so they protest. Then you find the exits and entrances to Pheli are blocked; tyres are burning; now taxis can't go to work, people can’t go to work, and that is unfair. And usually what happens in those protests is that people will loot shops. And to me, I'd really look at it like that, like to some the protest was just the decoy, the bigger picture was to loot all these shops."

Apple Soda/ Record Deal - “This is me showcasing that as much as I'm a trap artist, I can really rap. The first part of the song is the first episode. And then it switches to the 2Pac clip from an interview he did when he had just [been released from] jail and people had misconceptions about him. What he says has sentimental value to me; he would do anything to feed and protect his family. The second part is called ‘Record Deal’, and this is about when I had just signed the licensing agreement with Universal in 2019. People who don’t understand the business of that will always have a misconception. They're like, ‘You sold your soul. How could you sign to a major like that? Now we can't get verses from you. Now you’re not going to get your masters.’ Because they don't understand that I'm actually smarter than they think I am. My legal team is A1. So, I’m trying to let other kids know that there’s actually a smarter way to go about it in the business.”

King's GambitBag Man (feat. Killa-X) - “For this one, I had to call my homie from Soshanguve, Killa-X. When I was rapping in high school, we were a duo and we would sell mixtapes for like 20 bucks. He helped me pioneer my sound in terms of me rapping in vernac and mixing it up with English from time to time. For me to do this thing on a national scale or even an international scale, it’d only be fair for me to put Killa-X on the song.”

Quarter To Six (feat. Maglera Doe Boy) - "I had to hit up Maglera Doe Boy. He wanted to actually record the song [in the same space], but me and Zoo were in two different places at the time. We ended up recording at a hotel while he was in Pretoria. And then we hit up [the producer] Bushido to help us with the recording. The verse was already done, but that was only when I got to hear what he was spitting and it was crazy. When I played it for Zoo, he was like, ‘You two dudes are crazy. Y'all are like the future of street rap in SA.’”

The features on the album.

The twelve track album was worked on by some of the best unknown producers [yet] alongside Zoocci Coke Dope who executively produced and engineered the entire album. Temba, Space Save Logic, Avian Blitz, Mashbeatz, Flvme and Season98 all lend their ear and talents on the production of 'Pheli Makaveli'.