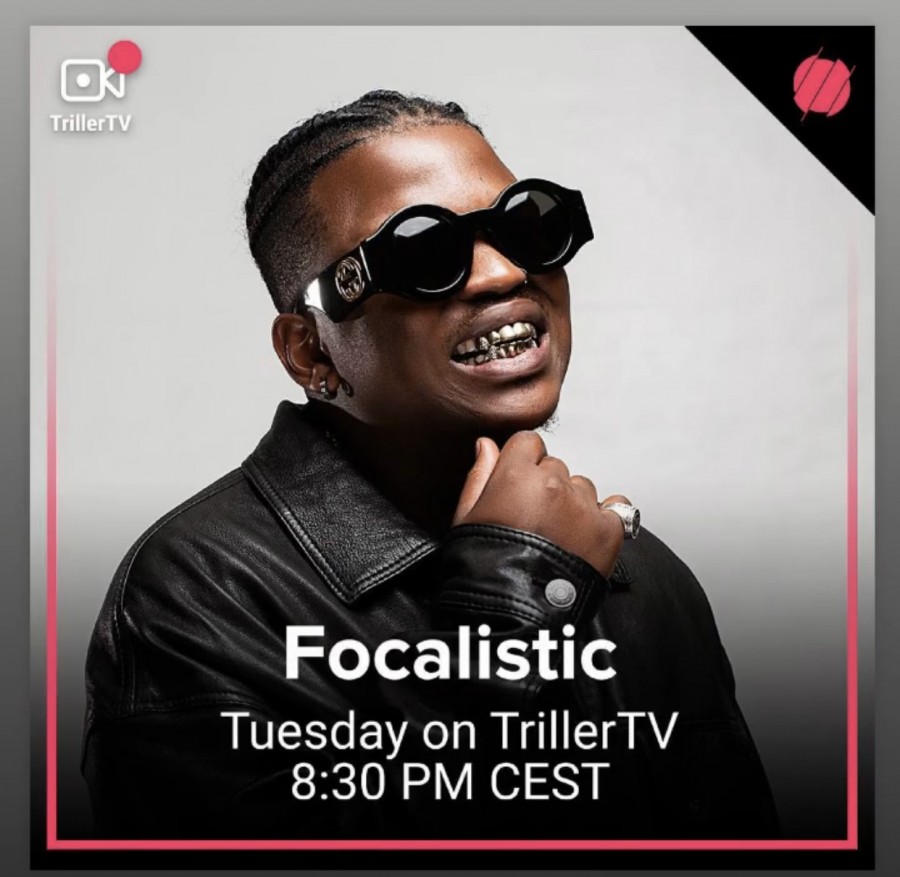 @FOCALISTIC, The First South African Artist To Star On #TrillerTV

Born Lethabo Sebetso in Pretoria in May 1996, Focalistic is excited about his new partnership with TrillerTV. Foca’s musical journey began when he was in Grade Nine, writing lyrics in his journal to express what he was feeling at the time.

“As I say, you don’t chase music, the music chases you. Back in my varsity days, no matter what I was studying, I always went back to music. I would record in the mornings, go to the library and then, straight from the library, I’d go back to recording. Shortly after varsity, I recorded a song called 'Nineteen Tobetsa' with Gemini Major and Major League – and I’ve never looked back.”

'Nineteen Tobetsa; was Foca’s first commercial hit, racking up 100,000 views in just a few weeks. “I realised this was what I was destined to do and the rest just fell into place naturally from there.” Focalistic’s taste for innovation, his sonic experimentation, and his commitment to honouring his own voice have propelled him into becoming the first South African artist to join the line-up on TrillerTV, which includes Jennifer Lopez, DJ Khaled and 2 Chains.

What he loves most about African music – tracing this back to Fela Kuti, Hugh Masekela, and Mam’ Miriam Makeba – is its dedication to saying things in an authentic voice. “We want to speak in our own voices and fans can feel that sentiment because it comes from deep within us.”

Foca recently toured sub-Saharan Africa, which made him feel closer to what he calls his ‘African brothers’ through music. “Whether I’m in Tanzania, Zambia, or Nigeria, I can feel the energy. It’s like artists are saying: ‘Because you are South African, you are our brother. You are our brother because we’re obsessed with hearing African people speaking in their own voices and with hearing their stories.’ That’s what I love the most about Africa.”

He dreams of inspiring the next generation of emerging musicians and content creators to explore new ways of reaching audiences - and of helping them to make statements about the world and the way they see it.

“Being the first South African artist to be featured on TrillerTV is amazing and it makes me think of the artists that will come after me. It’s dope to be a pioneer and to be able to alert other people to what you’re doing; to show them ways of amplifying their own careers and of building bridges with their fans. For me, that means we can speak in our own voices, tell our own stories, and sustain ourselves well into the future.”

“I’m proud of my musical achievements, especially my platinum awards,” he says. Both the original and the remix of his break-out single Ke Star have gone triple platinum. “For me that’s a big feat, you know. It’s something that doesn’t happen every day. It gives me ownership of my voice – and that’s important to me.”

In addition to his work as a musician, Foca is the founder and CEO of 18 Area, a record label that promises to illustrate the importance of owning one’s own master recordings to future generations. “I’m really glad that I’ve managed to get triple platinum, of course. But one of the real my highlights of my career will always be how my music has managed to change the lives of people around me. I guess that’s what we do it for, you know. When you see someone go from A to B because of the music, that’s a rush. There’s no award for that. There’s no accolade for something like that – and that’s what really truly touches me. Partnering with TrillerTV Launched earlier this year, TrillerTV provides an innovative platform for the world’s most celebrated musicians, podcasters, celebrities, and fashion, art and gaming influencers to host weekly 30-minute ’live shows’ using Triller Live.

“I’ve partnered with TrillerTV so that I can connect with fans from different regions and countries around the world. It’s the most innovative platform available to do this. I even released my most recent single, Gupta, on Triller. A lot of users started dancing to it, so I’d really like to thank Triller for supporting and promoting contemporary artists like me. It’s one of the reasons Gupta became so popular. Fans could really feel the energy of the song, which is why I say Triller is a bridge between artists and their fans. I look forward to using it to connect even more closely with my fans. Squad sa Maradona,” says Focalistic.

“Fans need a direct way to connect with you - and Triller provides an important bridge between artists and their fans. It amplifies the work and elevates the fans. When someone is able to connect with you directly and to show you how they’re connecting, that’s the essence of being a fan. I want to give people a window into my life, just as the greats have done. Triller is a great way to connect with your fans and give them a chance to see you in a different light.”

“Also on Triller, you get to see how fans react to your songs. Whether they dance to them or make reaction videos, you have a very intimate way to share your music with them.” Says Focalistic.

“As a brand, it’s our mission to be connectors, to drive trends, innovate, add value and invest in our creators in Africa,” says Joel Houenou, Africa Strategic Partnership Director at Triller. “We’re thrilled to welcome Focalistic to TrillerTV, the global home of all creatives.”

Focalistic’s career has been built on his distinctive sound, an infectious sense of confidence in his own voice, and his relentless swagger. His partnership with Triller will see him drawing inspiration from the greats to bring fans a new and exciting engagement experience. “On the international scene, I draw a lot of inspiration from Drake, Burna Boy, and Davido,” he says. “That’s because they represent where they come from, tell a genuine story, get the whole world dancing and, above all, make them feel something. They’re promoting a feeling that comes from where they come from. I guess that’s why they inspire me - because that’s what I’m trying to do.”

“On my home turf, special mention must go to the artists who came before me and inspired my sound: HHP, Khuli Chana and Spikiri. I want to build on their legacy. If you think about the different elements in my music, sgubhu is the bassline, Khuli Chana is the punchline, and the flow and swagger are inspired by HHP (may his soul rest in peace). They’re the artists who made me what I am today.”